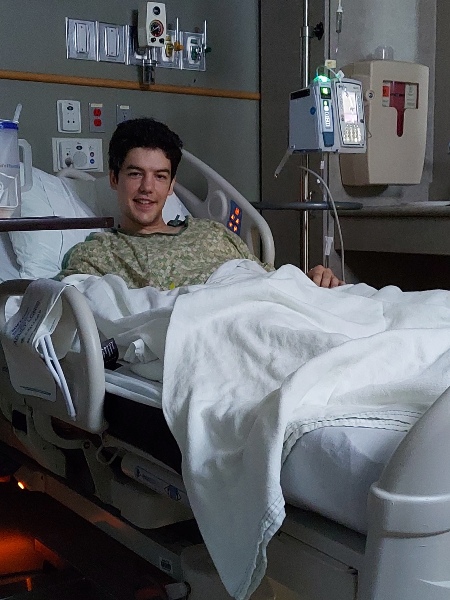 Camden recovers in the hospital after
donating his kidney.

When Camden Underwood was renewing his car registration online, he signed up to be a living kidney donor through a new registry. He had no idea he would be making history as the first in the country to use this registry and save a life.

Donate Life America, a nonprofit organization dedicated to increasing organ donation, launched the National Donate Life Living Donor Registry in late 2021. It's designed to lower barriers for organ donation by allowing individuals ages 18-65 who registered as a deceased donor to also register their interest in becoming a living kidney donor.

Camden didn't think much of it when he registered online. He just wanted to help his community. When asked to select a participating facility in Austin, he chose The Kidney Transplant Center at St. David's North Austin Medical Center, and after submitting paperwork and going through eligibility testing, he was matched with someone who needed a kidney.

Of the eight people who expressed interest, Camden was the first from the registry to donate a kidney. He underwent a successful surgery performed by Dr. Koushik Shaw on July 12, 2022, at St. David's North Austin Medical Center. His kidney helped save the life of one of the thousands of people awaiting an organ transplant. And it all started with the click of a button.

Reflecting on 2022 and looking ahead to the new...

January 13, 2023
As we look forward to what’s ahead for St. David’s HealthCare in 2023, we want to take this opportunity to look back at the milestones we’ve ...
Previous Post

January 13, 2023
February is American Heart Month, and one Heart Hospital of Austin employee is sharing his story
Next Post

Heart failure and heart rhythm: The link you need to know about