St. David’s Medical Center NICU graduate inspired to go into the field that saved her life 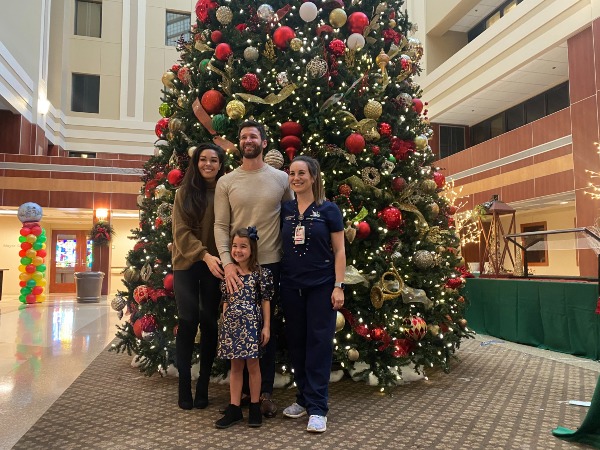 The Goveias recently reunited with a member of Kennedy’s NICU care team.

Laurel and Jericho Goveia had been married for only a few months and were still in honeymoon bliss when they discovered they were pregnant. The couple was ecstatic to start their family, and they were looking forward to welcoming a baby girl on New Year's Eve 2017. However, at the 20-week ultrasound, they were given news that no parents want to hear: their baby girl had gastroschisis—a hole in her abdominal wall.

The diagnosis set off a whirlwind of doctor's visits, medical terms and a new life that the Goveias had to adjust to quickly. Fortunately, through the “Baby Matters” program at St. David's Medical Center, the Goveias were introduced to a team of dedicated, compassionate nurses and doctors who would care for their daughter as she developed.

On Thanksgiving Day, Laurel delivered baby Kennedy at 32 weeks, and she was instantly rushed to the NICU. There, after having surgery to correct the gastroschisis, she spent three weeks receiving around-the-clock care, and Laurel and Jericho made sure to visit every night. Kennedy was strong, and her doctors were confident she would make a full recovery. A few days before Christmas, Laurel and Jericho were able to bring their baby girl home.

Today, Kennedy is a healthy, inquisitive and warm-hearted child who cares deeply for others. She knows the story of her birth, and even at five years old, she has a true appreciation for what her care team did for her. As a result, she now wants to be a doctor and go to Harvard like her grandfather.

In school, Kennedy is already showing her innate kindness by assisting teachers in class and lending a helping hand in special education programs. The Goveia family is confident that their daughter will grow up to be strong and able to do anything she sets her mind to.

Honoring 40 years of caring for our South Austin...

Sleep Apnea and its Impact on the Heart

Choosing the best OBGYN and hospital for you