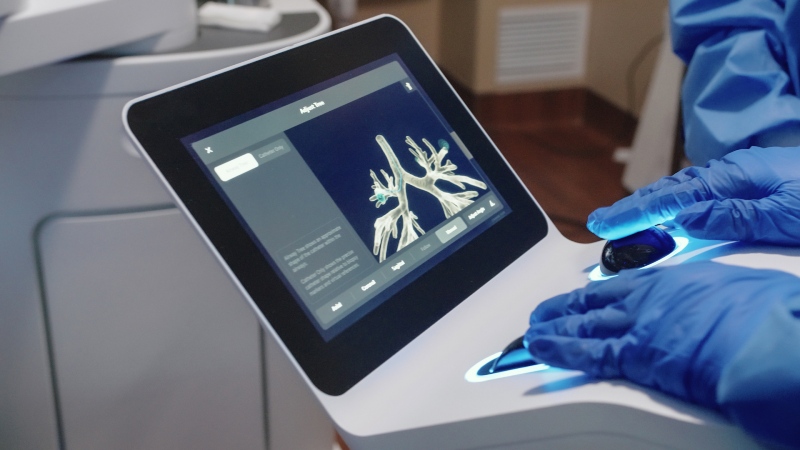 Close up of the robotic bronchoscopy platform in use.

Dr. William Bartek and physicians at St. David’s South Austin Medical Center are aiming to consistently detect and diagnose lung nodules smaller than two centimeters, which could set a new standard of care for pulmonary patients across the country. St. David’s South Austin Medical Center is the first-ever hospital in the United States to use robotic bronchoscopy and real-time 3D imaging together to safely find lung nodules and identify cancer with 85-100% accuracy.

According to the American Cancer Society, lung cancer is the second most common cancer in adults, and an estimated 236,740 new cases will be diagnosed in 2022. It is also one of the deadliest forms of cancer, with a five year survival rate of less than 20%.

Robotic bronchoscopy allows physicians to place a catheter in the patient’s lung to detect lung cancer. Previously, patients had to wait for their nodules to grow larger before they could be accessed safely. Now, when used in combination with real-time 3D imaging, physicians can catch cancerous nodules right away, without the patient needing to wait for extended periods of time. The goal is to eventually identify and remove cancerous nodules in one procedure.

“The robotic bronchoscopy platform has allowed us to target small nodules in all areas of the lung that were previously difficult to access,” Dr. Bartek said. “The addition of 3D imaging to this system allows us to update the target and potentially increase the success of our biopsies, hopefully reducing the need for additional procedures. Our goals are to diagnose these small lesions quickly so our patients can promptly move on to treatment. This new integration should help us accomplish this goal.”

Prior to the use of this technology, imaging with robotic catheter positioners had a lag time that affected the timing of diagnosis, as the two imaging systems could not be used together in real-time. Now, the systems can be used together with improved accuracy in finding and diagnosing lung cancer nodules.

As this technology becomes an integral part of St. David’s South Austin Medical Center, more and more patients will be able to have their lung cancer diagnosed, observed and even removed much sooner than before. This is a revolutionary innovation in pulmonary medicine that is growing the potential for saving lives.

Image of the robotic bronchoscopy platform

Young teen has a bright future after waking up...

September 8, 2022
Fifteen-year-old Daniel Rodriguez was a healthy and active teenager, going to school and playing soccer with his classmates. Then one day in ...
Next Post

The "aha moment" that changed everything