Barry Barnett is an accomplished martial artist and part-time instructor who recently relearned to walk after a below-knee amputation. He credits St. David’s Georgetown Hospital and their rehabilitation program for helping him get back to martial arts.

In the winter of 2021, Barry badly injured his toe but did not immediately pursue medical attention. His mother had recently suffered a stroke, and Barry put his own medical needs aside. Once she began to recover, Barry went to the emergency department at St. David’s Round Rock Medical Center, where he was told he had an infection that had spread and would require an amputation. Initially, only a toe amputation was diagnosed, but when his foot became necrotic, it was determined that a below-knee amputation was necessary. 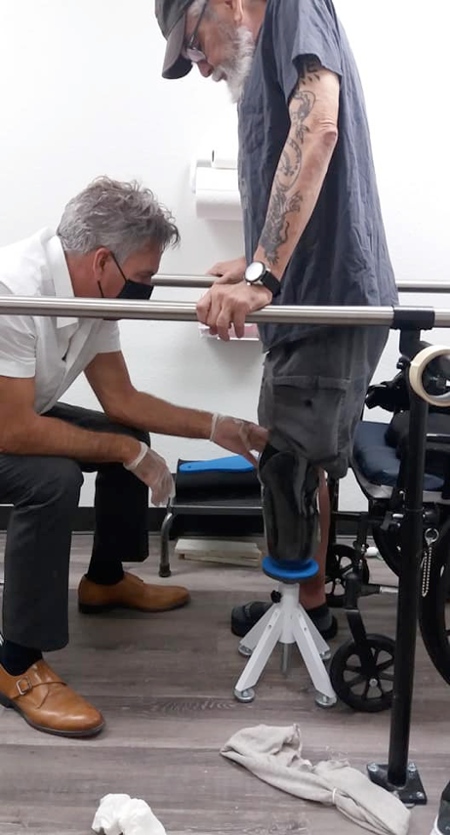 Barry Barnett learns how to walk with a prosthetic leg.

After a successful surgery, Barry was fitted with a prosthetic leg and underwent outpatient physical therapy at St. David’s Georgetown Hospital’s Lake Aire Rehab facility. Therapists used the hospital’s new track and harness system to suspend him from the ceiling. This system allowed Barry to understand the mechanics of moving his new prosthetic leg and relearn to walk. The rehabilitation process was a difficult one, but Barry’s discipline from 30 years of martial arts training helped him achieve his goals. His first major milestone was to walk 100 feet down a hallway, and then the milestones became greater and greater.

Thanks to the care Barry received at St. David’s Georgetown Hospital, he has been able to resume martial arts. He credits the track and harness therapy as the “game changer” that helped him get back to doing what he loves.

September 8, 2022
Lucy Garcia, a 35-year-old mom, was the picture of perfect health until she began experiencing strange symptoms last November
Next Post

Reflecting on 2022 and looking ahead to the new year