Tom Jackson joined St. David’s North Austin Medical Center as chief executive officer in 2017. He has more than 30 years of experience in the healthcare field.

Previously, Jackson served as chief executive officer of Tomball Regional Medical Center, as well as College Station Medical Center. He has served in other leadership positions, as well, including deputy executive director of MHMRA of Harris County (now known as The Harris Center for Mental Health and IDD), and chief operations officer of Twelve Oaks Hospital-AMI in Houston, TX.

Jackson earned his master’s degree in healthcare administration from Trinity University in San Antonio, and bachelor’s degrees in accounting and data processing quantitative analysis from the University of Arkansas. He is a fellow of the American College of Healthcare Executives. 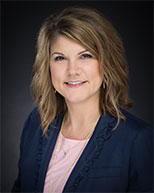 Becky Barnes joined St. David’s North Austin Medical Center as chief operating officer in May 2018. In this role, Barnes oversees the day-to-day operations of the hospital and leads a variety of programs and service lines including heart and vascular, neurology, OR, rehab services, engineering, construction, respiratory therapy, imaging, pharmacy and lab.

Barnes has 22 years of healthcare experience. She previously served as chief operating officer at Rapides Regional Medical Center—a 328-bed tertiary/quaternary hospital in Alexandria, Louisiana. Prior to her role there, she served for three years as chief operating officer of The Regional Medical Center of Acadiana in Lafayette, Louisiana, and for five years as vice president of operations at Rapides Regional Medical Center. Barnes began her career in healthcare serving in a number of clinical roles, including respiratory therapist, echocardiography technician, and echocardiography supervisor.

Barnes earned her bachelor of science degree in cardiopulmonary science from Louisiana State University Health Science Center in Shreveport, Louisiana, and she went on to earn her master of business administration degree from the University of Louisiana at Lafayette.

Prior to assuming that role, Leone most recently served as the division controller for the HCA Healthcare Capital Division, where she was responsible for the financial reporting of 18 hospitals across four states. Previously, she served as CFO at Capital Regional Medical Center, a 266-bed acute care hospital in Tallahassee. Prior to this, Leone served as interim CFO at Presbyterian/St. Luke's Medical Center and Rocky Mountain Hospital for Children in Denver, in addition to serving in various other roles, including physician practice management.

Leone earned a bachelor's degree in business from the University of Central Florida and an MBA from the Florida Institute of Technology.

With more than 20 years of healthcare experience, Cynthia Nicholas was named chief nursing officer of St. David’s North Austin Medical Center in July 2016. Prior to this, Nicholas served as chief nursing officer at St. David’s Round Rock Medical Center and at St. David’s Georgetown Hospital. At each facility, her responsibilities included line authority for all nursing and clinical operations, with supervision of director-level personnel across in-house departments, including the medical and surgical units, intensive care unit, women’s services, emergency department, operating room, and inpatient and outpatient rehabilitation, among others.

Prior to her role as chief nursing officer at St. David's Georgetown Hospital, Nicholas served as director of acute care services for the facility. She has also had other executive and managerial roles at Valley Regional Medical Center in Brownsville, Texas; the Baylor Health Care System in Dallas, Texas; Piedmont Hospital in Atlanta, Georgia; Tampa General Hospital in Tampa, Florida; International Air Ambulance in Florida; Broward Community Hospital in Fort Lauderdale, Florida; and, at Jackson Memorial Hospital in Miami, Florida.

Nicholas earned a bachelor of science degree in nursing from Florida International University in Miami. She went on to earn a master of science degree in nursing from the University of Miami. Nicholas is a TeamStepps master trainer, as well as a trainer of “7 Habits of Highly Effective People” (regular and healthcare versions). She also holds a nurse executive advanced board certification (NEA-BC) from the American Nurses Credentialing Center.

Dr. Charbeneau has served in various leadership positions prior to joining St. David's North Austin Medical Center, including vice chief of staff, department chair of internal medicine and facility medical director for Hospital Internists of Austin. He also served on the Hospital Internists of Texas Board of Directors.