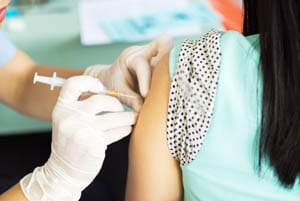 The cooler weather marks the start of fall—and the beginning of flu season. According to the Texas Department of State Health Services, flu season officially runs from October through May. In Texas, most flu activity occurs during the months of December, January and February; however, it can strike at any time. That’s why it’s important to get vaccinated now—before flu season is in full swing.

It is recommended people get the influenza vaccine every year, not only because protection decreases over time, but also because a new vaccine is developed annually to match the specific strains of flu expected to be circulated.

One of the main differences for this year’s flu recommendations is related to the FluMist. After data showed it wasn’t effective, the Centers for Disease Control and Prevention (CDC) Advisory Committee on Immunization Practices voted against using the nasal vaccine for the 2016-17 season. What does this change mean for children and parents?

It’s possible that children may need not just one flu shot this year, but two. According to CDC recommendations, if your child is older than 6 months, but younger than 9 years and has received the FluMist vaccine instead of the flu shot, the child won’t have the immunity needed to fight off the flu after just one flu shot. A second shot is recommended. The CDC has the same recommendation for children who have never received the flu shot.

According to the CDC, each year an average of 20,000 children under the age of 5 years are hospitalized because of influenza complications. With the potential for more demand on the flu vaccine due to the absence of the FluMist, it’s recommended you get your shot early.

In addition to the flu vaccine, it’s important to take everyday precautions to prevent the spread of germs, including:

Other populations who are at an increased risk of flu complications include the elderly and people with chronic illnesses. Of course, even healthy adults can benefit from getting a flu shot, as they may spread the virus to others who are particularly susceptible. In general, the CDC recommends a flu vaccine for anyone who is 6 months to 4 years or 50+ years of age, or those who have chronic pulmonary (asthma), cardiovascular, renal, hepatic, neurologic, hematologic or metabolic disorders, as well as people with a suppressed immune system. Women who are or will become pregnant during the flu season should get an influenza vaccine, as well as healthcare providers, residents of nursing homes and other caregivers.

Visit the CDC’s website for a look at the full list of populations who should get a flu vaccine.

January 8, 2016
Wintertime in Texas can bring a range of weather incidents from beautiful sun to rain and ice. Drivers need to be prepared for any possible road...
Next Post
RSS Feed

Is Your Child Properly Secured in the Car?

Lifestyle Apps to Help You Achieve Your Weight Loss Goals

How to Pack for a Festival in Austin