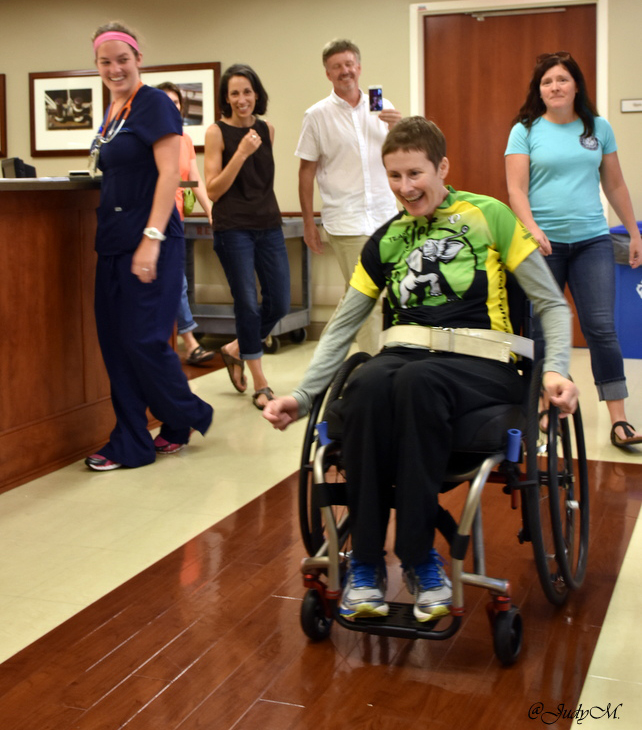 St. David’s HealthCare is pleased to share an inspiring story about a former triathlete who became paralyzed in a tragic accident but is on the road to recovery as a result of her hard work at St. David’s Rehabilitation Hospital.

A little more than one year ago Laurie Allen, an Austin triathlete, became paralyzed after stepping out of a hot tub and onto ice. She fell, fracturing two vertebrae and injuring her spinal cord. Allen was immediately taken to St. David’s Round Rock Medical Center, where she stayed in intensive care for five days. Doctors then transferred her to St. David’s Rehabilitation Hospital, where she began a new chapter of her life.

With an athlete’s mentality and determination, Allen has made strides in her recovery. When she started her rehabilitation, even sitting up was difficult, but with the help and support of her doctors, husband and friends, Allen has regained some mobility with a wheelchair.

Allen, who completed nine Ironman triathlons, is exercising again and taking driving lessons in a car specially equipped for her. She has vowed to complete a triathlon again, even if it’s from the seat of her wheelchair.

The Austin American-Statesman recently shared an article about Allen’s journey.

Pictured above: Laurie Allen, an Austin triathlete, tests out her new wheelchair after spending time at St. David’s Rehabilitation Hospital.

March 16, 2016
Layers of cream, lady fingers, and espresso combine to create a delicious family favorite. Even better, this version is only 180 calories a serving!
Next Post
RSS Feed

Do YOU know the symptoms of Diabetes?